Lessons from the ICAN Forum in Paris

It is clear that increasingly more demilitarization organizations all over the world have started to ask the same question: how can we meaningfully engage young people with our initiatives?

Our answer: follow the example of SCRAP and ICAN.

The International Campaign to Abolish Nuclear Weapons (ICAN) does not only talk about wanting to be inclusive, but they are actually making it happen. We were able to see this firsthand during the ICAN conference that took place in Paris in February 2020. They invited activists, students, campaigners, and anyone interested in changing the world to come together in Paris to discuss and learn about movement building, political change and activism, and that’s exactly what happened. Affordable student tickets and a program that promised to be diverse, interesting and actually fun led to a space that appreciated the voices of the young participants and was finally not dominated by acronyms and jargons that so often make anyone new to the field shy away from actively participating in the discussion.

The programme was a mix of plenaries, town halls and lightning talks with interactive activities on the sidelines and featured artists, scientists, activists and students. We learned more about strategic activism, culture and change, how to talk about today’s big challenges and working with different coalitions. The conference further included some lessons from ICAN’s own activism to ban nuclear weapons in collaborations and discussions with leaders from other movements to provide students and activists of all ages a broader understanding of activism in our time. Talks with titles ranging from So you wanna change the world? To Nuclear Weapons 101: Risks, Consequences and solutions, combined with the opportunity to get one on one advice on global movement building and positive change making by Rebecca Johnson (Acronym), Janet Fenton (Campaign for Nuclear Disarmament), Tuva Krogh Widskjold (ICAN Norway) and Jason Wojciechowski (Corelab) created a positive educational space that fostered in-depth exchange. 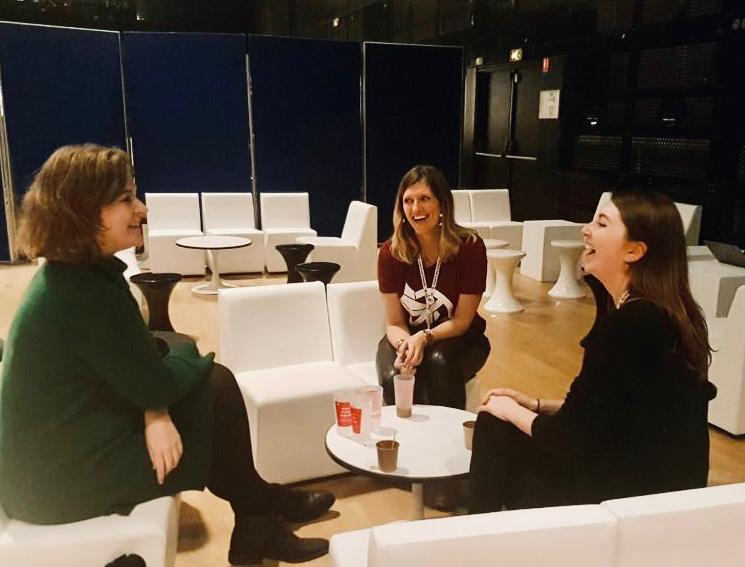 Joining the conference as members of the SCRAP Weapons Team, an organization that fosters youth-led policy formulation and the cross-pollination of ideas rather than information silos, we appreciated that ICAN similarly to  SCRAP provides a space for engaged young people to advocate for a holistic approach to comprehensive global weapons governance. By grounding their advocacy efforts within the international legislature on nuclear weapons (that to this point has been ratified by 36 states) means that we are very close to witnessing a Treaty on the Prohibition of Nuclear Weapons become a binding feature of international law. This highlights a pathway on how international law can empower the voices and ethical concerns of young people. This is an effort that we at SCRAP are already undertaking by presenting a treaty on General and Complete Disarmament, which besides nuclear weapons also covers actions plans for the global disarmament of small arms and light weapons. SCRAP’s holistic approach to global disarmament comes from the initiative of students, alumni and staff at the Centre for International Studies and Diplomacy (CISD) at SOAS, University of London, and is actively supported by a committee of academics and NGO officials with governmental experience. It draws on best practices of past agreements to expand the idea of what is possible in disarmament and is constantly developed and improved by the student body at SOAS. SCRAP volunteers and activists have already played a key role in the development of the draft treaty, design of the website and building links with other NGOs such as Oxfam International. Dan Plesch, the director of SCRAP, has said that these ideas have been taken out of a purely academic context and it is the enthusiasm and determination of our student body drawn from some fifty countries that makes change happen. If these ideas are to become reality one day, the campaigning work of SCRAP student representatives will be key in making decision-makers listen.

It is clear that civil society and disarmament organisations worldwide have realised how important it is to involve young people but there is still a need to bring the young people involved in disarmament and peacebuilding processes further to the decision making tables and further recognise the force of youth peacebuilders as agents of conflict transformation and peacebuilding. The adoption of the United Nations Security Council Resolution (UNSCR 2250) highlighted the importance of youth, peace and security (YPS) in high level decision making. Governments must urgently implement UNSCR2250 and foster meaningful youth participation in peacebuilding processes through effective policies and programmes. This involves engaging youth constituencies in defining country strategies and peacebuilding processes that are reflective of their needs and aspirations.

Almost four years since the historic adoption of the United Nations (UN) Security Council Resolution (SCR) 2250, most signatory Member States are still lagging in supporting youth-led initiatives and generating conducive environments for youth inclusion at the local level while civil society organisations have picked it up and are actively engaging more young people in their efforts.

We have to acknowledge that involving young people depends on making the debate around disarmament more accessible, and not only in regard to the language but also who gets to participate. Therefore, three necessary initiatives for us are: the simplification of the language utilized in disarmament debates, the creation of education materials and the extension of inclusive spaces where disarmament efforts can be discussed and youth movements become mobilized.

We are excited that SCRAP Weapons, ICAN, and other organisations alike are already working together to help shift this conversation towards more meaningful youth participation, and look forward to seeing more organisations join. We are grateful to ICAN for hosting us and we very much look forward to the next activist forum!